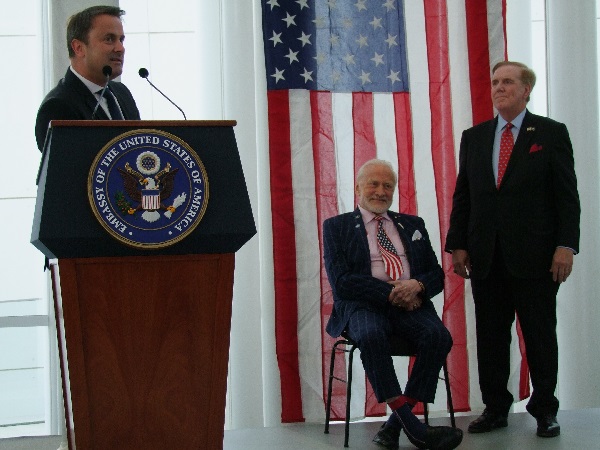 On Wednesday evening, the U.S. Embassy Luxembourg held its traditional Independence Day reception, this time at the Philharmonie in Luxembourg-Kirchberg.

In addition to several hundred members of the local community, including many with ties to the U.S., ambassadors and government members, the event brought together the largest U.S. Congressional delegation to Luxembourg in history, as well as the one and only Buzz Aldrin, one of the first human beings to have set foot on the moon. A fitting special guest considering the theme of this year’s celebrations was space.

The celebrations began with a posting of the colours by U.S. Marine Guard Detachment – U.S. Embassy, followed by a performance of the U.S. and Luxembourg national anthems by Voices International.

Master of Ceremonies, Deputy Chief of Mission Casey Mace, then welcomed a very well-dressed Paul Kirby, the young nephew of U.S. Ambassador J. Randolph “Randy” Evans, to the stage to introduce his uncle – in French. In his opening speech, Ambassador Randy Evans spoke of the significance of this reception, not only in celebrating 243 years of U.S. independence but also the 50th anniversary of the Apollo 11 moon landing (20 July 1969) and the close ties between Luxembourg and the U.S. that continue today, especially in the field of space exploration.

The ambassador’s words paved the way for the speech of special guest Apollo 11 astronaut Dr. Buzz Aldrin, who made history along with his colleagues Neil Armstrong and Michael Collins in 1969 when they successfully completed the world’s first moon landing. This living legend reflected on his past as a fighter pilot, having signed up to serve his country in the military at the age of 17, an engineer, an astronaut and his career with NASA.

Buzz Aldrin continued by looking at the present and the future. He emphasised the possibilities and freedom offered by developments in airplanes in recent decades and expressed his hope that this will extend to accessible space travel in the near future. In this context, he quirked that his career and the developments in air travel had permitted him to fly over places as diverse as Luxembourg– although not intentionally – and North Korea (Korean War) during his military and space career. He added that the future should focus on the “next step”, just as the U.S. had termed the 1969 moon landing a “giant step”, which, for him, is a wider space alliance bringing together “not just government space agencies, but all capable entities”. He concluded by welcoming members of the U.S. congress, who are an important part of this future, and called for mankind to focus on five Ds: “discover what we want to do, discuss it, decide, make a declaration and then do it!”

U.S. Senator Roger Wicker and U.S. House of Representatives Majority Leader Steny Hoyer also spoke on this occasion, once again highlighting the historic moments of U.S. independence and the moon landing, but also that of the signing of the transatlantic treaty. Members of the diplomatic corps and other congressmen and congresswomen were also present.

Guests also had the chance to watch a video presentation of Apollo 11 before Luxembourg Prime Minister Xavier Bettel took the stage. In his speech, Xavier Bettel reflected on the strong historic ties between the U.S. and the Grand Duchy, most recently cemented in the signing of a Memorandum of Understanding on space exploration. Xavier Bettel also recalled the sacrifices of many U.S., Canadian and British soldiers during the World Wars for Luxembourg’s freedom, despite many “not knowing where Luxembourg was on a map”. With regards space, he added that the feats of Buzz Aldrin and his colleagues 50 years ago was something children (and adults) could have only dreamed of at that time, and that current ambitions for space exploration today may still seem like a dream for many, but this too will become tomorrow’s reality.

The celebrations ended with a networking cocktail against the backdrop of the space- and U.S.-themed foyer of the Philharmonie, which even showcased a small segment of moon rock collected during the 1969 moon landing.

Luxembourgish, Russian VIPs Unite for Charitable Cause at Russian...

Two-Thirds of Luxembourg Residents Holiday at least Once a Year...