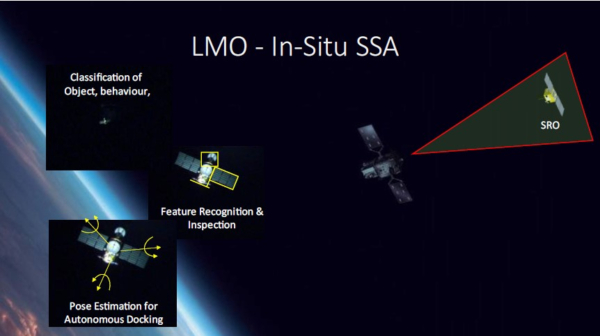 On Thursday 5 May 2022, Luxembourg space start-up LMO announced that it has been awarded an European Space Agency (ESA) LuxImpulse contract for the Development of In-Orbit servicing and SSA (DIOSSA) applications with the University of Luxembourg's Interdisciplinary Centre for Security, Reliability and Trust (SnT).

For last two years, LMO and the University of Luxembourg’s SnT, through its Computer Vision, Imaging and Machine Intelligence Research Group (CVI2), have been working together to bring computer vision-based autonomous technologies from ground up to space.

In the last decade, the use of space has grown exponentially, influencing daily lives in communication, weather monitoring, localisation, and many more. To do this, hundreds of satellites are launced. However, once in space, satellites operate on their own – vulnerable and oblivious to the environment around them.

With this increased footprint in space, so has the amount of trash – known as space debris – and other threats towards satellites. With autonomous technology similar to that used in self-driving cars, LMO is providing the necessary tools for satellites to look around them in space and make autonomous decisions based on this information, without the need for ground segment intervention; tools that are becoming ever more critical as space becomes more congested. At the core of these autonomous tasks are computer vision and artificial intelligence (AI) algorithms.

For its first product, LMO is combining space sensors with novel computer vision techniques into a dedicated single payload (SSA Payload), which can process images in space and provide insights of the surrounding area of a satellite, otherwise known as In-Situ Space Situational Awareness (SSA). The SSA payload will enable satellites to autonomously survey Space Resident Objects (SRO) around them, offering key information such as: “identification, classification, feature recognition and pose estimation, critical to enable safe navigation in space.

With the SSA Payload mounted on-board civil and defence satellites, they will be able to:

The increased autonomy and collaboration of satellites in space will enable the exponential growth of the in-space economy, enabling such aspirations as large space structures assemblies, deep-space logistics and planetary mining.

To achieve its goal and build from a solid foundation in computer vision expertise, LMO partnered in 2020 with the Computer Vision, Imaging and Machine Intelligence Research Group (CVI2) at SnT, headed by Professor Djamila Aouada, a department with more than twelve years of expertise in the field of computer vision and AI.

The partnership has led to key advances in using computer vision for in-space autonomy, including testing of algorithms in dedicated facilities to simulate rendezvous scenarios and relative navigation,as well as testing of algorithms for image identification, classification and pose estimation in software embedded in space electronics architectures.

On the back of this success, LMO, together with SnT, signed a large development contract with ESA for the DIOSSA applications. DIOSSA will allow the consortium to validate the performance of its SSA Payload in a dedicated in-orbit servicing facility developed at SnT. The programme is funded by the Luxembourg Government through an ESA Contract in the Luxembourg National Space Programme, LuxIMPULSE.

Muriel Hooghe, Senior Project Manager at Space Safety at the Luxembourg Space Agency, said: “I had thechance to visit LMO’s experimental setup in the 0-G lab, witness the great spirit and dedication of theteam and incredible teamwork with SnT. We’re looking forward to hearing about the next steps ofthis project and seeing it contribute to a safer space".

Michel Poucet, CEO of LMO, said: “We are proud of the progress our team has made together and withSnT and are grateful for the support received from the LSA in helping us reach our ambitions of bringautonomy to space”.

Marcos Perez, CTO of LMO, said: “The synergy of both LMO and SnT working together is fuelled not onlyby sound technical expertise but also by a great enthusiasm and motivation for these enabling spaceapplications. LSA, with its strategic vision and capacity, has created a flourishing environment to tacklethese future challenges”.

Djamila Aouada, Head of CVI2 at SnT, said – “It is extremely rewarding to witness how far our respective teams have grown together thanks to a tight collaboration. The support from LSA adds a new dimension to our ongoing joint project. It creates an exciting unique configuration that will allow us to bring our Computer Vision innovations relatively faster to real space deployment through parallel implementation on hardware, and development and testing in the Zero-G Lab at SnT”.

Björn Ottersten, Director of SnT, said: “The technology being developed within the partnership between LMO and SnT presents an exciting angle of research, which aims to address a pressing challenge affecting the communication infrastructures present in our Earth’s orbit. We are delighted to be working with LMO on this project, and contributing to a more sustainable future”.

New National Warning System Expected to be Operational by End of ...

Lidl to Open 2 New Stores in Dudelange, Windhof This Month...